The site uses cookies and similar technologies to ensure the proper functioning of the website and to offer you the best user experience and personalisation in advertisements and offers.

TravelBird uses functional cookies and analytical cookies to give you the best user experience. Moreover, TravelBird and third parties place tracking cookies to tailor advertisements and/or offers on the website and in the newsletter (if you are registered for this) to your personal preferences. Also, tracking cookies are placed by social media networks. Through these tracking cookies, your Internet behavior within and beyond our website can be monitored. By clicking on ‘accept’ or by proceeding on our website, you consent to this. Want to know more about the use of cookies and/or personal data by TravelBird, please read our Privacy- en Cookiebeleid

Swimming in the Dead Sea, a unique experience!

The rock city of Petra and one of the world's new Seven Wonders.

The Dead Sea at dusk.

The infinity pool at the Kempinski Hotel with divine views over the pastel waters of the Dead Sea.

The red sands of the Wadi Rum desert, often used as a Hollywood filmset.

Salt formations on the Dead Sea.

A colour spectrum like no other at the Dead Sea.

Hercules's hand at the ancient citadel in Amman (bookable as an optional excursion).

See the ‘Madaba Map’, an ancient mosaic and the oldest map of Palestine in existence.

Roman ruins in the capital, Amman.

The incredible colours of the Dead Sea.

The incredible starry sky as viewed from the Wadi Rum desert.

The central mosque of Madaba.

Camels are a typical sight in the Jordanian desert.

One of the Kempinski Ishtar Dead Sea hotel's many pools!

Arrive in Petra via the narrow Siq canyon about 1 mile long.

The Wadi Rum desert and it's impressive rock formations!

ON day 4, you will visit Mount Nebo where Moses is said to have seen the Promised Land.

The Treasury in Petra by night.

The King's Highway, meandering its way through the desert

The Sae of Galilee isn't too far to drive you you want to rent a car and explore the area!

Salt formations on the Dead Sea.

Enjoy the unique formations and colours of the Dead Sea.

The Temple of Hercules in Amman (bookable as an optional excursion)

Wadi Rum, also known as the 'Valley of the Moon' - one of the most spectacular landscapes on earth

Welcome to Jordan, where ancient history, desert landscapes and healing seas meet 5-star luxury! From the comfort of your hotel on the edge of the Dead Sea, explore this fascinating part of the Middle East known for its welcoming people and hospitality. Enjoy a dip – or rather a ‘float’ – on this stretch of healing water, renowned for its salts, muds and minerals that have been exploited for thousands of years. Step back in time with a visit to the ancient city of Petra, a breathtaking network of caves, temples and tombs carved into the red sandstone rock. Marvel at the Byzantine mosaics of Madaba and immerse yourself in the biblical stories Mount Nebo and Bethany. Next stop, Jordan!

Tailor your trip with our new Customisable deals.

We work with our trusted partners in the region to offer you the best possible stay.

When you plan your trip, after you've selected a date, we will show you all the information about the hotel you will be staying at.

Benefits of all the hotels 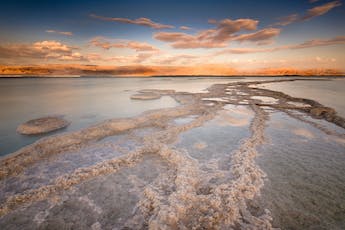 Welcome to Amman, the capital of Jordan! Upon arrival at the airport, a driver will be waiting for you holding a board with your name on it, ready to take you to your 5-star hotel located on the Dead Sea. Once at the hotel, you will have the rest of the day and the whole of day 2 to yourself. ... Read more 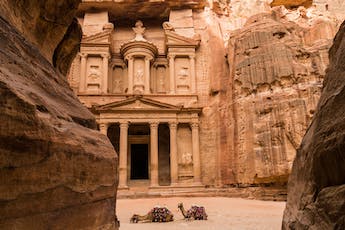 Day 3: The splendours of Petra

The legendary city of Petra awaits on day 3! At approximately 08:00, a driver will pick you up at your hotel and take you to this magnificent archaeological site 130 miles away. You will take an old trade route known as the ‘Incense Trail’ or the ‘Kings Highway’.

Located in the heart ... Read more 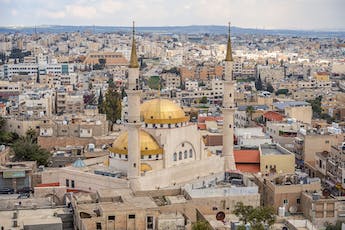 After breakfast, a driver will pick you up at the hotel, ready to take you to the three locations that await today. First stop is Madaba, also known as the ‘City of Mosaics’ and best known for its collection of Byzantine mosaics, including the ‘Madaba Map’, the oldest map of Palestine in exist... Read more 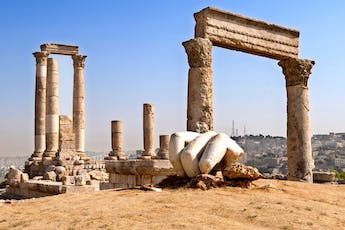 Have you booked a 5-night trip? Then day 5 is a free day to spend as you wish – you can relax by the pool at your hotel or by the Dead Sea, you can choose to go on one of the optional excursions or you can rent a car and explore the area on your own. 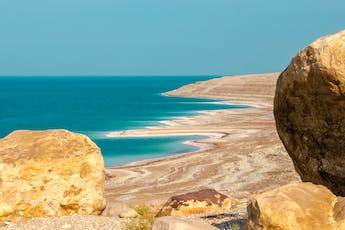 If you have opted for a 5-night stay, your journey will come to an end on day 6 when you will be picked up at your hotel and taken to Amman airport.

If you have opted for a 7-night stay, you still have some time to enjoy your 5-star hotel and the Dead Sea on days 6 and 7. Your journey... Read more

Optional excursions are available to make your trip even more spectacular. Both excursions can be booked and paid for during the booking process. You will receive all practical information before departure.

• Wadi Rum by Jeep (days 2 or 5 for a 5-night stay; or days 2, 5, 6 or 7 for a 7-night stay) •
Experience the desert wilderness of southern Jordan with a 1.5-hour Jeep excursion! This area is also known as the ‘Valley of the Moon’ by the locals, and you can see why: mountains meet the red desert sands and rolling dunes creating a landscape like no other. Are you ready for a ride through this unique valley that has featured in countless films? This excursion lasts roughly 1.5 hours and includes transportation to and from the hotel.

• Tour of Amman city (bookable on day 2 for a 5-night stay; included on day 5 for a 7-night stay) •
The capital of Jordan is worth a visit during your stay! Let a guide show you the hotspots of this Middle Eastern metropolis. This excursion includes transportation to and from the hotel and a guide.

Check prices and availability for this offer
Show prices

If you book this deal before 42 days of your departure, you can choose to pay in parts. The deposit will be 50% of the deal’s price plus the booking fee and travel and/or cancellation insurance (when applicable). You will find the payment amounts and deadlines to pay every installment at the last step of the booking process.